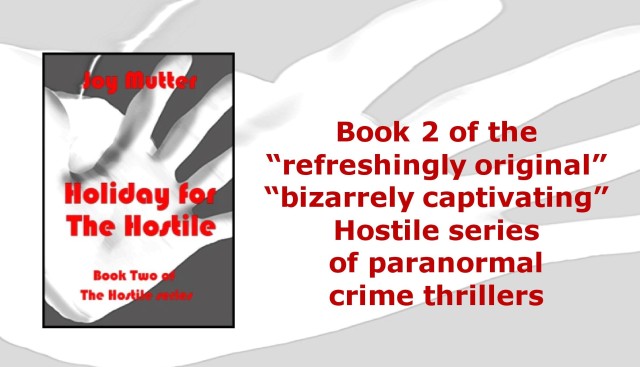 Serena, plus her unusual friend and partner in crime, Tile X, find themselves suffering a family holiday at her eccentric grandfather’s hovel in Ireland. Who will manage to escape intact from their dramatic holiday from Hell?
Holiday for The Hostile, book 2 in The Hostile quartet, is a gripping contemporary paranormal crime thriller with a splash of horror. It was published on Amazon in Kindle and paperback editions in December 2016 and can be read as a standalone like the other books in the collection. Book 1 in the series is called The Hostile, book 3 is The Hostile Game. Book 4, Confronting The Hostile, was published in August 2017 along with The Hostile Series Box Set. The audiobook edition of Holiday for The Hostile, narrated by Alexander Doddy, is available on Audible, Amazon, and iTunes along with the audiobook versions of The Hostile, The Hostile Game, and Confronting The Hostile.