The Kindle of HOLIDAY FOR THE HOSTILE is FREE on Amazon from 3rd-4th April.

Serena, plus her unusual friend and partner in crime, Tile X, find themselves suffering a family holiday at her eccentric grandfather’s hovel in Ireland. Who will manage to escape intact from their dramatic holiday from Hell?

Remember, if you download the free Kindle on Amazon, you can also download the audiobook, beautifully narrated by Alexander Doddy, for a mere pittance.

Here’s a snapshot of what readers say about Holiday for The Hostile: “Compelling, strange, and wonderful”; “Ms Mutter has carved out a new niche for herself. And from where I’m standing, she’s way out in front”; “With some books, you get an idea where things are going and where they’re likely to end. Not this one. Every chapter was a surprise with new characters and situations and a bunch of wonderfully inventive deaths;” “It has plenty of scary bits … can’t wait until book three is out”; “The end is a total surprise. I was expecting a skeleton in the family closet, but it turns in a completely different direction, keeping you on your toes and guessing;” “Excellent. Really looking forward to more. Joy tells a good tale.”

11 of my 12 Kindle editions are only £0.99, or equivalent currencies, on Amazon, and are always free to Kindle Unlimited subscribers. The Kindle version of The Hostile Series Box Set is only £2.30 for all 4 books in The Hostile series. Random Bullets, Potholes and Magic Carpets, Her demonic Angel, The Hostile, Holiday for The Hostile, The Hostile Game, Confronting The Hostile, and A Slice of the Seventies are also available on Amazon, Audible, and iTunes as audiobooks.

You can find all editions of my books here: http://amzn.to/2r4yyTA 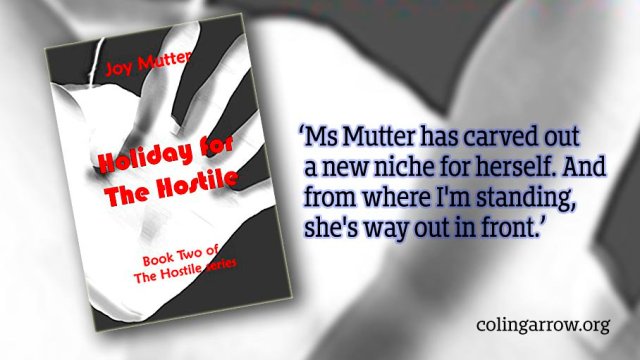