In The Hostile Game, Manchester-based Serena, now eighteen and pregnant, finally discovers the reason why Tile X befriended her seven years before. She doesn’t like what she hears. Mayhem ensues, with a retired Irish police superintendent becoming more involved than perhaps he should have.

The Hostile Game, book 3 of The Hostile series, is an exciting contemporary paranormal crime thriller. It was published on Amazon in Kindle and paperback editions in April 2017. 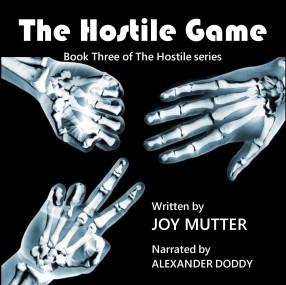 As with all the other books in the series, an audiobook version, narrated by Alexander Doddy, is available on Audible, Amazon, and iTunes. It can also be enjoyed as a standalone. Book 4, Confronting The Hostile, was published in August 2017, soon followed by The Hostile Series Box Set.

“Joy Mutter delivers another wonderfully offbeat paranormal thriller, mellowed with a delicious dark humour.” “An original premise, using original characters who you will quickly love and hate, and a clever twist at the conclusion.” “Delightfully different.” “A crazy, fascinating journey”. “Compelling, strange, and wonderful”.

11 of my 12 Kindle editions are only £0.99, or equivalent currencies, on Amazon, and are always free to Kindle Unlimited subscribers. The Kindle version of The Hostile Series Box Set is only £2.30 for all 4 books in The Hostile series. Random Bullets, Potholes and Magic Carpets, Her demonic Angel, The Hostile, Holiday for The Hostile, The Hostile Game, Confronting The Hostile, and A Slice of the Seventies are also available on Amazon, Audible, and iTunes as audiobooks.

You can find all editions of my books here: http://amzn.to/2r4yyTA

Here’s an excerpt from THE HOSTILE GAME http://amzn.to/2pKDBfe